You are here: Home / Blog / The Wild Atlantic Way

A Short Break in The North of Ireland 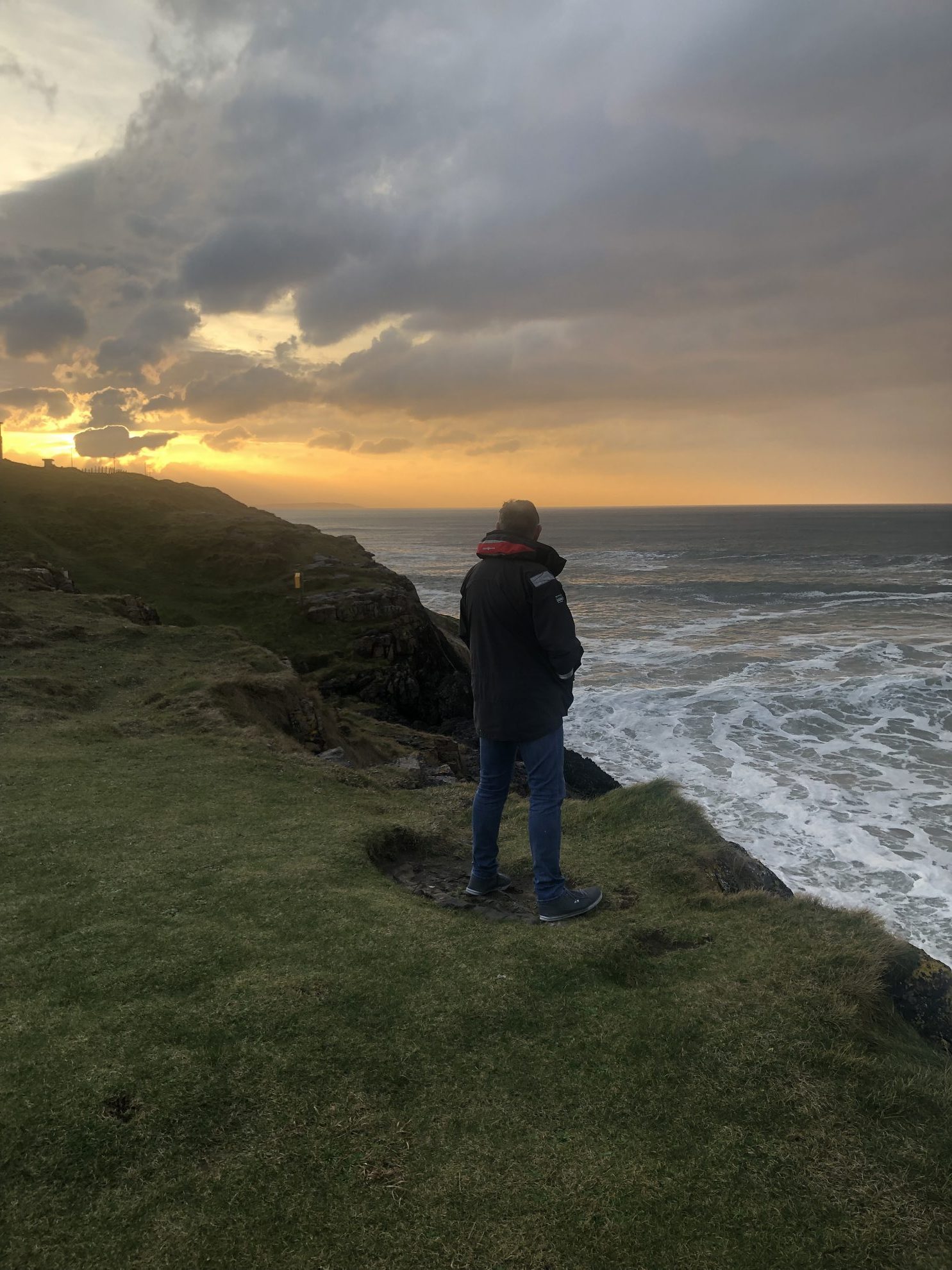 It’s just over a week to go before we lift the boat back into the water and start the season again.

Last week though, we had a bit of a change and caught a flight to Belfast. We were in Belfast a few weeks ago so this time we decided to hire a car and head west to check out what is called ‘The Wild Atlantic Way’.

So, in the company of Mandy and Craig alias Mr & Mrs Netdec, check them out Netdec they’re IT experts and that’s my plug for them :-)

What’s good about flying to Belfast is that the flight is quick and the airport is small so there’s none of the arsing about you get at Manchester. Hire car collected we headed for the first destination, Enniskillen. Personally, I wanted to visit here because my uncle served with the Enniskillen Fusiliers in WWII and my Dad served with them during his national service.

After this stop we headed over to Ballyshannon in Co Donegal which is in the Republic of Ireland and for the muso’s among you it was the birthplace of Rory Gallagher. We stayed in a place called Heron’s Cove which was in a lovely location and the host’s were absolutely fantastic and very welcoming. We spent the evening ‘necking a few’ in Ballyshannon and the next morning set off for our next destination, Derry (or Londonderry depending on your own perspective). Prior to going out on the keg we had a quick ride into Co Sligo to see the coast and something called The Fairy Bridges. 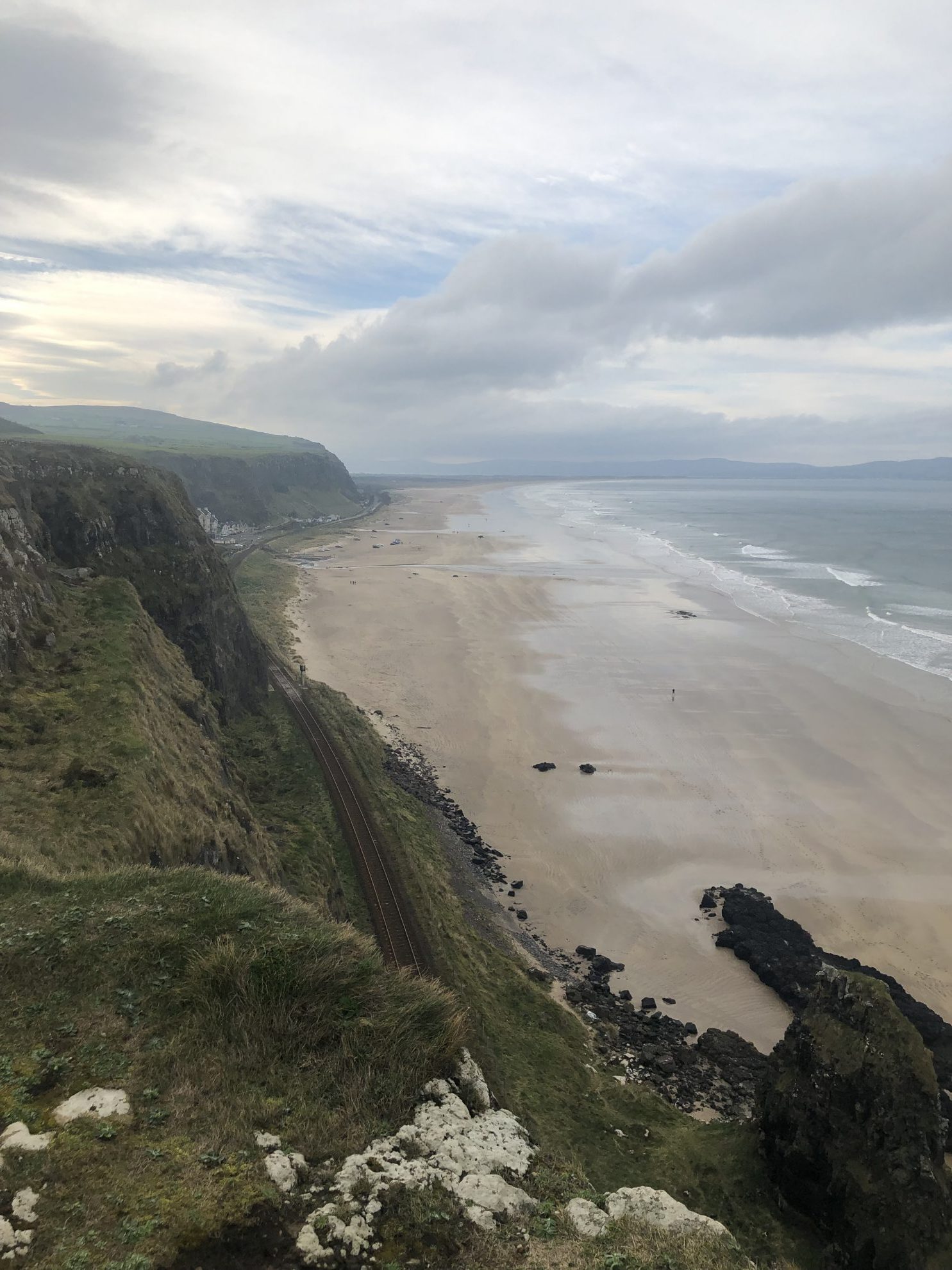 The picture at he top is of me at this place looking out into the Atlantic. The coastline here is really dramatic and a sight to behold. When looking out you can imagine that if you headed due west you would eventually end up in Newfoundland.

We didn’t head straight for Derry, we hit the N56 which is essentially the coast road and gives you some beautiful scenery to look at on the way. We stopped in a fishing village of Killybegs for midday noshing and then headed to a place called Slieve League.

Because we weren’t on a set schedule we could drop in and out of various places on the way. Again, when we walked around Slieve League we were amazed at how dramatic the coast and cliffs are. If you are ever in the vicinity then make sure you visit.

From here we set off for Derry. It was quick getting there because we had Blackburn’s version of Lewis Hamilton driving us. I must say I was doing a bit of ‘passenger side brake pressing’. I felt safe at all times though I must admit my arse twitched on a couple of occasions.

Craig had very kindly arranged the route and were we planned to stay. When we arrived at our second home for the night, as we pulled up outside my initial thought was WTAF ? We were at the Abbey B & B.

Now to all intents and purposes it is an extended semi-detached house but it is absolutely brilliant. The theme and decor are fantastic and ‘when’ we visit Derry again we will definitely be staying here. Check them out The Abbey B & B, the owner Seamus is a topbloke.

The Abbey is in the area what is called The Bogside and just a very short walk from the centre of town. Seamus recommended Peader O’Donnell’s for spending the evening because they play live Irish music. We were not disappointed and had a very entertaining evening.

Growing up as I did, a British Catholic, I understand both sides of the conflict. It was always in the news from the late 60s onward and I have read a hell of a lot about it over the years. Whenever we visit a city we always try and do a walking tour because we think this is the best way to see it and have it explained to you by a local. When we were in Belfast a few weeks prior we did a ‘political walking tour’ whereby it was split in half. The first half was spent walking around the Falls Road area being given the story from the Nationalist perspective then the second half we exchanged guides to be taken around the Shankill area and given the story from the Loyalist perspective.

For Derry, I’d looked up on the internet and found a tour company. Suffice to say I was not disappointed, they were very flexible with start times and where to meet and the tour we were on centred around The Conflict and Bloody Sunday.

Gleann was our guide and gave us a very riveting insight to the modern day troubles that started with the civil rights movement, battle of The Bogside, Bloody Sunday and so forth. Gleann told us many facts that an outsider wouldn’t know and is very close to the history having suffered the loss of his father in Bloody Sunday. I could honestly say that I could have listened to him all day and would say that if you ever visit Derry and don’t do one of these tours you are definitely missing out. Make sure you check these guys out Derry Guided Tours

Their tours are not just about Derry so if you are around the area they are probably worth a call.

After this we spent the day walking the city walls and wandering the town. We called into a place called Willy Nilly’s and all I will say about this establishment is that the owner is a complete arsehole and I would urge anyone visiting Derry not to give this bloke any business. He is an A1 prick.

Next up was the place I’d been meaning to visit for years. We stayed at The Causeway hotel after passing through Portrush to visit a friend. The following morning we set off on our trek in good time to try and beat the masses. This place is astounding and makes for a very good walk that has views second to none. Because we were relatively early getting to the causeway we could get some good photos without any other tourists on them. Any words or pictures of this place do not do it justice.

I won’t try and describe it myself I will just say that you should make sure to visit.

From here we followed the coast road, dropping in at various other stunning places as we made our way back to Belfast.

All in all it was one of the best short breaks I have had for a very long time and rest assured I will definitely be visiting Derry again.

Next stop is Greece

The next time we are away is just over a week’s time when we return to Lavrio to lift the boat back into the water and start the sailing season again. This time though I get to complete what has become a 20 year voyage which I will report on in due course.

Where we are based

ENQUIRE ABOUT YOUR NEXT SAILING HOLIDAY

This site uses cookies to enhance your experience. More info